The Art of Target Practice

UPDATE: The Target Practice Project now has its very own blog, where the work of participating artists will be featured. You can follow along here: http://thetargetpracticeproject.blogspot.com.

While other kids were out doing social pre-teen things, I was being dragged around an archery trail or instructed how to man a fishing rod stuffed into a sand spike. Such is the life of a daughter of a sportsman. Of course there were other things I would much rather have been doing, but those things didn't matter and certainly nobody ever asked me about them. And I had learned at a much younger age not even to bring them up. This is because a parent afflicted with narcissism doesn't mirror back the child to the child as is desirable and normal, so what the child wants or needs simply doesn't matter. No, to a narcissistic parent, the child IS the mirror, reflecting back the parent's own issues and interests, in this case, bows and arrows, guns, fishing and camping gear, and boats.


My father left behind all this stuff when he passed away, at 90, in June of this year, but it was the tall stack of 1960s archery targets from Sears Roebuck, hidden behind some ancient fish coolers in the garage, that got my attention. As a collagist, I am always on the lookout for old paper with interesting patterns. Still, I didn't grab the targets right away. Instead, over the next several weeks I entered into a polite hands-off relationship with them, where I would nod in their direction as I entered and exited my father's house to perform my clean-out chores. Under self-scrutiny, I see that my relationship to the targets is not unlike the adult relationship I had with my father, especially in respect to my artwork, which he never once asked to see or even noticed on the walls of my home. Just as my pre-teen essence was irrelevant to my father, so was my adult essence. My father died without ever acknowledging even a single product of my heart, spirit, or hand.
But now I had these targets, and something grand in me wanted to make the two divergent threads—one of my artwork, one of my father—intertwine. You could say that I saw redemption in the crosshairs. Time was offering me an opportunity to create a congruence that had not existed in my life, and so I pulled back the metaphorical bow string and shot the arrow. I snapped some photos of the pile of targets, posted them on Facebook, and put out a call to my artist friends both here in the States and internationally. Who wanted to collage some targets? I started a group on Facebook, called “Target Practice,” where people could post their work. Within a few days I had mailed out almost 150 targets. Finished target collages have already started to roll back in. It is amazing what artists are doing with them.
These aren't memorials to the past, just enchantment in the present. This gives me comfort and great hope.


You can link to the Facebook group here, https://www.facebook.com/groups/161991817319872/ but for now here's a look at some of the great work that's already been posted. Stay tuned for an update as more work arrives.

What's Playing in the Loft

Link to Society6 for prints and cool cell cases: 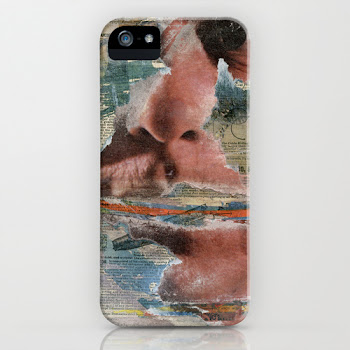